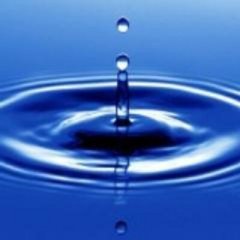 Recently, I was asked by someone who wanted to start a blog for some advice and I replied as I’ve always done, that; they should write for themselves only – assuming always that nobody else will read it – and that they should stop the moment that writing it ceased to be enjoyable. Unfortunately, writing this blog ceased to be enjoyable for me about two years back and so I’m stopping.

I’ve deactivated my Twitter account but I’ll not delete this blog as it may have material useful to researchers. My email will be deactivated also.

I wish all my readers the best of luck in the future.

This is the way the blog ends, not with a bang but with an ellipsis…

Leave The Light On

Comments Off on Leave The Light On

Getting Away With It

Speak To Me Someone

Kiss from a Rose

The Friday Night Song (with the words!)

You Can’t Always Get What You Want

HyperNormalisation And The EU 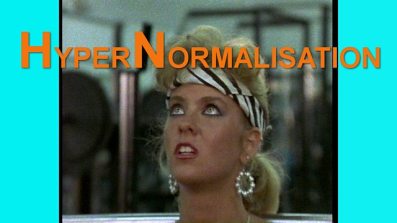 If you have not already watched the BBC documentary film by Adam Curtis, HyperNormalisation – the story of how we got here, it is hardly surprising given that it was released on 16 October 2016 on the BBC iPlayer with little or no fanfare. Almost 3 hours long, perhaps the BBC felt that the general public didn’t have the patience, or intelligence, to sit through it and so it wasn’t broadcast on any of the BBC channels as far as I know, which is a great shame because this is a must watch film, in my view one of the most important films I’ve seen in many a year.

The music and imagery are at times haunting and occasionally disturbing, made more so by the occasional inclusion in the film of the familiar and superficial imagery from YouTube and aerobics videos , but this only adds to the powerful and serious historical narrative which Adam Curtis develops.

What I loved about this film was that it doesn’t treat the audience as fools. Big events like the collapse of the Soviet Union and 9/11 feature but only in passing; it’s as though Adam Curtis is saying to the viewer, “I know you already know about these events and I’m not going to patronise you by going over what you already understand – instead I’ll concentrate on events that you may not have known or have forgotten.”  That, as a viewer, is refreshing.

In the film Curtis explains that the West deliberately targeted Libya and Iraq, in the process making Gaddafi and Saddam Hussein ‘super-villains’, as a way of being seen to act when Syria was to blame for the disruption in the Middle East and terrorism which provoked these conflicts. These are not new allegations and Curtis’s case is compelling but nevertheless, unbidden, my subconscious kept throwing up the words of Orwell from 1984: ““The past was alterable. The past never had been altered. Oceania was at war with Eastasia. Oceania had always been at war with Eastasia.” Of course, Curtis was not attempting to rewrite history, it was an history which I and most others had already understood, Curtis was just placing it in exquisite context with far greater explanation than I’d seen or read before. Current events, the build up of Russian and NATO forces as a result of the Syrian Civil War had made me wary that an ex post facto justification for war was being made.

If I have one criticism of the film it was that it failed to make explicit the obvious conclusion that the current establishment mindset in the EU and the USA was a form of HyperNormalisation.

The term “hypernormalisation” is taken from Alexei Yurchak’s 2006 book Everything was Forever, Until it was No More: The Last Soviet Generation, about the paradoxes of life in the Soviet Union during the late communist period shortly before it collapsed, when everyone knew the system was failing but no one could imagine any alternative to the status quo, and politicians and citizens were resigned to maintaining a pretence of a functioning society. Over time, this delusion became a self-fulfilling prophecy and the “fakeness” was accepted by everyone as real, an effect which Yurchak termed “hypernormalisation”. 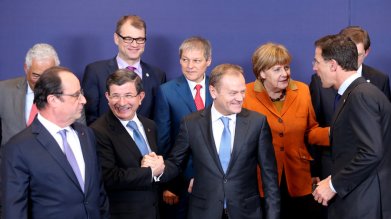 Everybody smiles in a hypernormal reality

By any important, measurable, and tangible standard the EU is irreparably and irretrievably  broken.

It is broken economically – it only has the semblance of solvency due to deceit, fraud, and computerised money printing which will never resolve the problem but only exacerbate the consequences of its inevitable collapse while inexorably impoverishing its citizens.

It is broken socially – just look at Greece where unemployment is at 23%, almost a quarter, and youth unemployment stands at a staggering 51%. but Greece is not alone, only the most serious case.

It is broken politically – the perpetuation of a hypernormal EU status quo is the policy of every ‘moderate’ mainstream political party across the entire EU – effectively driving the electorate looking for an alternative to the political extremes. EU dogma is the cause of increasing nationalism in Europe.

Its security is broken – it can’t even secure its own borders, the primary responsibility of any nation state.

Only a hypernormal mindset can explain why nobody is prepared to recognise just how broken the EU is.

Remember this quote 10 days before the Brexit referendum ?

“As a historian I fear Brexit could be the beginning of the destruction of not only the EU but also Western political civilisation in its entirety,” – European Council president Donald Tusk

The EU was broken long before the UK voted to leave but Brexit demonstrated that the hypnotic hypernormalisation was wearing off in Europe. ‘Fear’ is the important word that Tusk uses. Fear of the unknown, fear of the future.

“Everyone knew the system was failing but no one could imagine any alternative to the status quo, and politicians and citizens were resigned to maintaining a pretence of a functioning society.”