The Daily Mail have reported that the former TV children’s presenter, in his 80s who lives in Berkshire and was questioned under caution for sexual offences in a South London Police Station last November (Rolf Harris) has spent Christmas in The Priory, a private ‘psychiatric’ clinic for the rich and famous.

They also report that he had been arrested but not charged, whereas I have only ever written that he had had his home searched and that he was questioned under caution.

The unnamed man, who is in his 80s, is understood to be staying at a Priory clinic after suffering from stress, reported the Sunday People.

The presenter, who can not be named for legal reasons, is thought to be suicidal and receiving round-the-clock care.

It is thought he was admitted to the private mental health hospital, which charges up to £7,000 a week for care, before the festive celebrations.

In November the presenter, from Berkshire, attended a south London station by appointment and was questioned for around five hours on suspicion of sexual offences and has not been charged.

We know from court cases and statements made to my team [during the 2008 inquiry] that children in Jersey care homes were ‘loaned out’ to members of the yachting fraternity and other prominent citizens on the pretence of recreational trips but during which they were savagely abused and often raped.” –  Former Deputy Chief Officer Lenny Harper

A States of Jersey police spokesman said the allegation was made by a former Haut de la Garenne resident against Sir Jimmy in 2008, with the assault alleged to have occurred in the mid 1970s.

A police spokesman said: “During the course of the States of Jersey Police’s historic abuse investigation a complaint of indecent assault said to have occurred during the 1970s at the former children’s home Haut de la Garenne was received.

“The allegation was investigated but there was insufficient evidence to proceed.”

And the online allegation which pre-dates Savile’s Exposure…

The Wheel of Fortune By T Stokes  One of those who stood most to lose was Sir Edward Heath prime minister from 1970-74, who was known to visit the Jersey care home the Haute Garrene among others to take young boys on boating weekends on his yacht called  ‘Morning Cloud’, or as bodyguards referred to it, ‘Morning Sickness’.
Heath was warned on 4 occasions by the head of the Metropolitan police not to loiter in London’s lavatories and not to try to pick up young boys.   A source spoke to one of his victims and he said about others who were present, and more important, who was supplying the children to him……….

………………..The person bringing children for him to abuse is Sir Jimmy Saville. He was seen by the witness, victim, taking young boys onboard Heaths yacht the morning cloud when they were at party conference. Saville is known for supplying a number of high profile MP’s with children for them to sexually abuse.

Grateful thanks to the Welshwitch. :-)

Edit: also thanks to Coco for 2nd Heath Picture

David Mellor Is A Paedophile

Police traced a paedophile to his home after the indecent picture he took of a girl had a giveaway shop sign in the background.

David Mellor, 62, didn’t spot he had included it when he photographed the underage girl, in his kitchen and posted the picture on the internet.

But officers in Lincoln recognised the sign and identified the street and his home from the picture’s angle.

The image was seen on a file-sharing website by a specialist officer with the Child Exploitation and Online Protection unit.

When police raided Mellor’s property they found more then 8,000 indecent images of children on a computer. 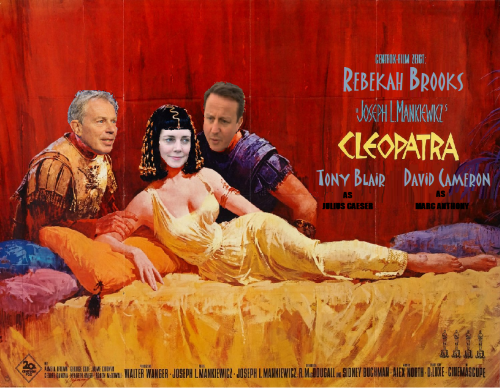 One Link Between Lord McAlpine And Jimmy Savile.

I don’t know about you but as I keep on looking at all the redacted letters, it seems to me that somebody’s name has been covered up. Somebody who must have been very close to the Prime Minister……………………..possibly somebody who  understood fund raising……………. possibly even somebody with an interest in the construction industry………….?

Always a good idea to have the architects plans with you………….

Of course, it couldn’t be Lord Alistair McAlpine’s name that has been hidden. After all, this correspondence was censored on the 11th October 2012, why on earth would Mr Wayland feel it necessary to expunge any link between Lord McAlpine and Jimmy Savile back then, long before the Newsnight program on Nov 2nd………….?

No, ignore all that idle speculation………..

Though interestingly A consortium led by Alfred McAlpine construction won the £40 million Stoke Mandeville contract in 2004 (though it is difficult to find info as a great deal of internet content has been removed). Now, I’m not sure that this is the same construction contract that Savile was touting to Margaret Thatcher back in 1982 but it is one definite link between Jimmy Savile and Lord McAlpine…………..

The Jimmy Savile Letters Which Have Been Redacted

This is all of the redacted correspondence I could find released by the National Archive concerning Jimmy Savile. Does anyone know if the 40 years starts from this year or from 1982 ?

Looking at the correspondence I find it very hard to understand why these passages could have been redacted. What may have been slightly embarrassing revelations will now be the subject of intense speculation.

If I were to guess I’d say that Jimmy Savile lobbied hard for a Government donation to Stoke Mandeville Hospital, a change  to the law on  charitable covenants and perhaps for a knighthood (though he wouldn’t get one for another 8 years.) and perhaps Margaret Thatcher may have given some slightly improper personal undertaking that she would make it happen but considering what we know about Jimmy Savile now and the questions raised about Margaret Thatcher’s association with high profile paedophiles both inside and outside of Government, the inevitable speculation as to what actually has been censored and redacted could be far more damaging to Margaret Thatcher’s reputation than simply publishing all the documents in full. 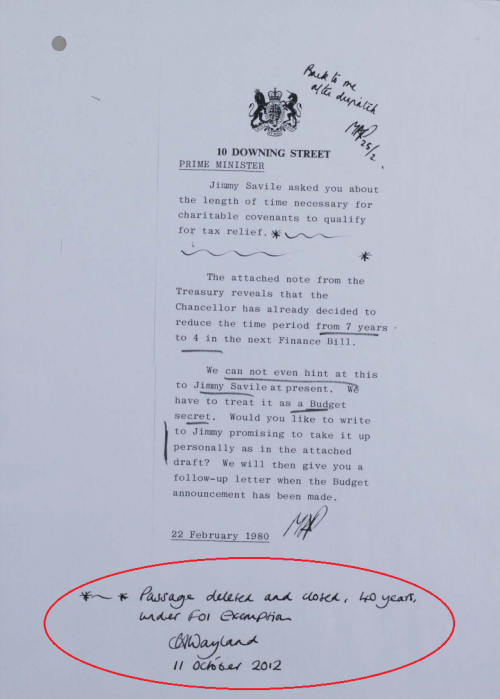 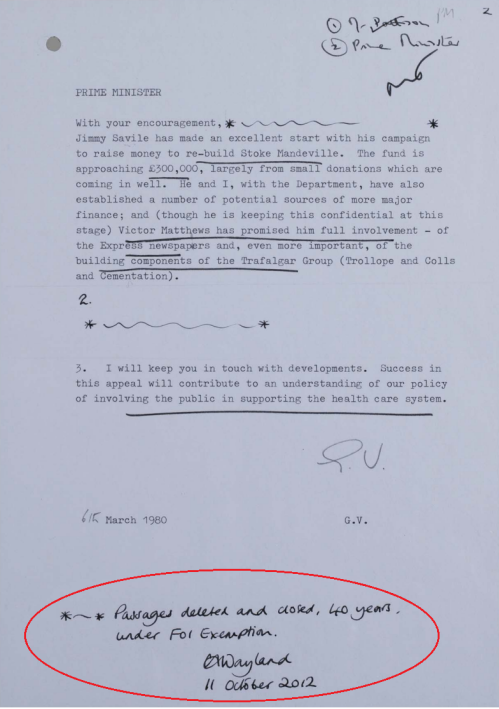