Thomas Kenyon, Son of Lord Kenyon, Was a Paedophile. 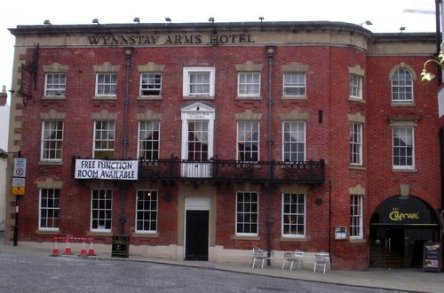 The Wynnstay Arms Hotel Wrexham, known as The Crest Hotel between 1960 and 1985

A great many people have been asking the question; Who was the son of a Lord who is implicated in the North Wales child abuse scandal and cover-up ?

Actually, the answer has been online for over 15 years in this very revealing article.

Because of the libel threat only two people can be connected to the Jillings report. Both are now dead. One is Sir Peter Morrison, a former deputy chairman of the Conservative Party, and one of Thatcher’s key aides. His sister is Lady of the Bedchamber to the Queen. One of his more extraordinary achievements is not hearing the IRA bomb go off while staying at the Grand Hotel in Brighton in 1985.

The other is Thomas Kenyon, son of the late Lord Kenyon. Thomas died of Aids three years ago. His brother represents Wales on the EU’s Committee of the Regions. These names alone give some indication of the kind of people who might have been named in the report, if they were name-able.

It is unclear if the author was unaware of the Waterhouse injunction or, as seems more likely, wrote this article before the injunction extension came into to being.

This should answer the puzzle set by Nick Davies and below I’ve taken a part of an article he wrote back in 1997 and added [in bold] the missing names.

Lord Kenyon was a powerful man: he had a considerable private income; he was a senior freemason,  a respected patron of the arts and a champion of good causes; he became a familiar figure in the corridors of power both in the City of London, where he sat on the board of Lloyds Bank, one of the largest companies in Britain, and in the political world, where he became an influential figure in regional politics. His son, Thomas Kenyon, however, was a very different creature.

Thomas Kenyon drifted into the low life of Wrexham, in North Wales, where he made his home. He drank, he mixed with a group of people who were in and out of prison and, most of all, he hung around the red-brick public toilets by the bus station in King Street. According to evidence which has been given behind a screen of anonymity at the North Wales Child Abuse Tribunal, Lord Kenyon’s son was a paedophile.

In July 1979, Thomas Kenyon, then aged 25, had an alarming experience. He woke up in a room in the Crest Hotel in Wrexham to discover that all of his clothes and possessions had been stolen – by a young boy with whom he had been having sex that night. This boy, who was then two years below the age of consent and was supposed to be in the care of the local authority, has now told the tribunal that Thomas Kenyon used him for sex “on numerous occasions”.

Thomas Kenyon had no doubt at all about how to handle this theft. He went to the police and not only named the treacherous boy but explained quite openly why it was that they were sharing a room. A contemporary note made by the boy’s social worker records that the police were aware of allegations of “homosexual activities” between the boy and Thomas Kenyon . The police investigated. The outcome was clear: the boy was convicted of theft and sent to a detention centre for three months; Thomas Kenyon was never charged with any offence at all.

Under normal circumstances, Lord Kenyon and his son,Thomas Kenyon,  would both by now have been identified in the press as their names surfaced in the proceedings of the tribunal, which has been holding open sessions for eight months. The public would have joined the tribunal in making a judgement about whether  Thomas Kenyon escaped prosecution simply because there was insufficient evidence (he later told police that his claim to have had sex with the boy must have been “a figment of the imagination”) or whether Thomas Kenyon was right to boast, as one convicted paedophile told the tribunal, that his influential father could intervene to protect them.

As it is,Thomas Kenyon  has not been named because the chairman of the North Wales Tribunal, Sir Ronald Waterhouse QC,  has ruled that, unless they have been convicted in court, no living person who is or is likely to be accused of abusing children in care can be identified. It so happens that Thomas Kenyon  is dead – and so is Lord Kenyon – but Sir Ronald has extended his ruling to prevent either man being named.

I should just say at this stage, that all references to Lord Kenyon in this article are to Lloyd Tyrell-Kenyon 5th Baron Kenyon and not his son the 6th Baron Kenyon who bears the same name.

For the most part information about the family has been expunged from the internet. There are no wikipedia entries for either the 5th or 6th Baron Kenyon which is unusual for members of the aristocracy. It is a bit like “the curious incident of the dog [that didn’t bark] in the night-time.”

Rather than clearly naming Thomas Kenyon as a paedophile, I originally thought to create a biography here – Who was Thomas Kenyon ? as a resource for others to use when his name would inevitably have come out. I still wish to do that and I’d be grateful to anyone with info who can help fill out those biographies to contact me.

But overnight a number of issues which I believe are of legitimate public interest and concern, came to mind and I’ve decided to name him.

When was Thomas Kenyon diagnosed with Aids ?

What is the likely date that Thomas Kenyon contracted Aids ?

Was Thomas Kenyon still abusing young boys after he was diagnosed with Aids ?

With the knowledge that Thomas Kenyon had Aids, were the victims of child abuse offered the opportunity to be tested for Aids ?

Have any of the victims of child abuse in North Wales been diagnosed with Aids, or have died of Aids ?

These, I believe, are legitimate questions of public concern and they can not wait for further prevarication and cover-up before being answered.

15 responses to “Thomas Kenyon, Son of Lord Kenyon, Was a Paedophile.”