Elm Guest House And Why The Truth Matters !

When I first started looking into historical child sexual abuse I rather naively thought that no one would possibly lie about a subject that was so serious. I was wrong and this post reveals how I came to realise that. It will also help readers to understand why The Needle has sought to navigate a course between those that believe and report everything and anything and those that believe nothing and report that no allegation is true. What I and the Needleteam have come to realise is that the greatest threats to the truth, which is certainly in the public interest to understand, are the false witnesses who appear to corroborate existing allegations of the testimony of genuine survivors. These false witnesses are like a poison which contaminates the truth. After a while the truth and the lie become so associated that once the lie is unearthed, as invariably it always is, the truth is dismissed along with it and with the truth goes any hope the genuine survivor has of justice and any chance the public have of understanding the gravity of the complex child sexual abuse issue in the UK.

What I have come to realise is that it is extremely easy to cover-up child sexual abuse but you don’t do it by testing the evidence, you do it by providing false corroborative evidence and exaggeration. You build it up then knock it down and the truth gets buried in the rubble of lies. The process of embellishing the truth with lies and exaggeration has been a cooperative effort between some elements of the Alternative Media (AM) who will often publish any unsubstantiated rumour believing that there is little consequence and some elements of the Mainstream Media (MSM) who have spotted a rich vein of stories, stories that sell newspapers. Often the relationship between the established media and the ‘new’ media is symbiotic with false stories in the MSM becoming embedded as ‘truth’ in the AM and with MSM outlets, with fewer professional journalists because of increasing financial pressures due to the emergence of online media, searching for new angles in the AM thus turning rumour into ‘truth’. It is almost an alchemical process like turning lead into gold but when the tallyman comes for payment you’ll find that the result is worthless and don’t then be too surprised if the tallyman is wary even when you offer good coin.

Anyway, those are general points, I want to write now about a specific one to help illustrate it.

In December 2012 a raft of documents suddenly appeared online posted by Mary Moss, formally of NAYPIC, which appeared to be related to the Elm Guest House which was the subject of what was then a new police investigation, Operation Fernbridge. The significance of the documents only appeared to increase when officers from Operation Fernbridge raided Mary Moss’s home and seized the documents. I had already spent a few months looking into allegations of historic child sexual abuse across the UK and, like a great many people online, I began to try to decipher and understand the documents in the public domain but, unlike most others, I very quickly found myself in a privileged position with access to many of those connected in some way to those documents. I learned from Chris Fay, a former NAYPIC advisor, that the documents were written by him circa 1990 and that they were private notes and speculations that were never intended to have been put in the public domain but as they had been put into the public domain Chris Fay was eager to help us understand them. It may interest readers to know that one of the first things that Chris Fay wanted to clarify was that he had found no evidence that a pop star mentioned in the documents had sexually abused children. Chris Fay was very generous with his time and not adverse to having long held beliefs tested and although I have come to the conclusion that the documents are at best very misleading, at worst mostly very wrong, I remain extremely grateful for the time he gave us.

Another source I talked to in the early part of 2013 was a man by the name of Clive Godden who was described in the documents as a “private investigator”. Mr Godden’s input primarily regarded the allegation that child sexual abuse at Elm Guest House was connected to a ‘child pornography’ racket run by London mobsters. At the very centre of this set up was a man called David Hamilton Grant. David Hamilton Grant was a small time film maker during the 1970s which included low budget pornography. Initially, we believed him to be dead but when we discovered that news of his death was slightly premature and he was living in Southern Europe we became intrigued to say the least. It all seemed to fit, it all seemed so plausible but we were to learn that allegations connecting David Hamilton Grant to Elm Guest House were a determined fabrication.

Mr Godden had talked to Operation Fernbridge, he maintained that he had spoken to Carole Kasir, had seen compromising photographs in her possession  of VIPs, including Leon Brittan, with young boys, and that he, Clive Godden, had in his possession Carole Kasir’s notebook, which he described as his “insurance policy”. Then one day he told me that he had evidence of a police raid during the late 1980s on a boat house used by David Hamilton Grant as storage in which the police at the time had seized ‘child pornography’ including some produced at Elm Guest House. He even gave me the date, the names of the police officers involved and the search warrant reference number. I explained to Clive Godden that if true I could not publish anything without first having talked to Operation Fernbridge. After all, if physical evidence of child sexual abuse at Elm Guest House implicating VIPs existed somewhere in a police warehouse then it was extremely important that they had the opportunity of retrieving it. Clive Godden eagerly agreed and I called Operation Fernbridge and gave them the details and they promised to get back to me. When they did a few days later they explained that they were already aware of the information and seemed remarkably unperturbed by the prospect of the details being published.

Ah! What a great story it would have been. Imagine, the police had seized evidence of child sexual abuse involving VIPs and done nothing !!

There was just one problem with it. It was complete crap.

If it had not been for the advice of Exaro’s Mark Conrad who was investigating the very same issues at the time, and who cautioned that I should be careful and dig further, I might have published then and I’m very grateful to Mark for that.

Clive Godden had promised to send me a copy of the search warrant and other documents by post and impatiently I waited for them to fall through my letterbox and then I could write my big story. When several days later a thick A4 manilla envelope arrived I sat down and started to go through the documentation. Slowly it began to dawn on me that something was very wrong. I found the copy of the search warrant and found to my disbelief that Mr Godden had filled out half of it himself and his account of how he became interested in David Hamilton Grant which he had recounted on the phone on several occasions looked even flakier now that it was written in black and white before me. Yet still the notion that anyone would lie about an issue as important as child sexual abuse was so alien to me that I refused to immediately accept it. I first decided that Clive Godden had only slightly embellished his account but slowly any veneer of plausibility to Mr Godden’s story fell away.

The boat house had been used by David Hamilton Grant as storage and the police had indeed raided it but far from seizing ‘child pornography’ produced at Elm Guest House involving VIPs, the police instead seized a cache of counterfeit VHS videos. Nothing but a van load of ‘knock off’ pirated tapes of Convoy, ET, or something similar.  No wonder Operation Fernbridge were so laid back. Oh, what a fool I’d been !

Mr Godden’s tale started to unravel and the truth began to emerge. The inconvenient fact the Clive Godden’s wife had run off with David Hamilton Grant, which had always left me uncomfortable, now became a motive for a remarkable campaign of vindictiveness which has stretched back three decades. Somehow, Mr Godden was able get David Hamilton Grant deported from Cyprus and a local newspaper reported the departure of this ‘evil child pornographer’. He fled to Turkey pursued by Mr Godden who, using the evidence from the Cypriot newspaper story, was able to get a Turkish newspaper to run something similar and then, astonishingly, by producing both the Cypriot and Turkish newspaper stories and other evidence he had cobbled together he managed to get stories printed in the UK including even The Sun. Creating  in the process a false canon of media stories which appeared to corroborate his tale. 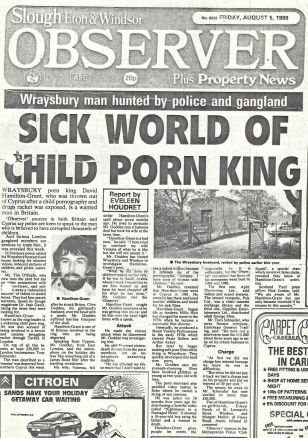 At a stroke I had to re-evaluate everything in the documents but more importantly I had learned a crucial lesson and luckily for myself it was one I learnt at a very early stage of my investigations and that is that people lie and their reasons for doing so aren’t always immediately apparent. By no means does everyone lie but a minority do and my starting point that nobody would lie where child sexual abuse was concerned was both naive and deeply flawed.

Now, here is my main point. There are many untrue elaborations and false witness testimonies in the Alternative Media and in the Mainstream Media regarding Elm Guest House but regardless of all of them and after two years of critical investigation I would still maintain that there was child sexual abuse there, that VIPs were involved, and that, as evidenced by the recent IPCC investigation, there are serious questions to be answered regarding why the police did not adequately investigate at the time.

I don’t tell you the story of Clive Godden seeking to undermine the truth regarding Elm Guest House, I tell you it to demonstrate that the truth can and will withstand false evidence and this is not a point specific to Elm Guest House it is a more general one. The danger for the campaign to expose historical child sexual abuse does not lie in the exposure of untruths, it only becomes damaging when ‘campaigners’ continue to maintain that what can be demonstrated to be false is true because when this is done the truth is buried in the rubble of the lies.

57 responses to “Elm Guest House And Why The Truth Matters !”