Savile and the abuse of absolute power 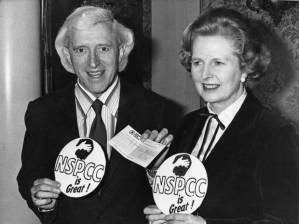 Extracts from Janice Turner’s Opinion article in The Times today;

A freelance despot, Savile befriended both high and low in the NHS. In return, they helped him commit his crimes

In the whole 253-page report into Jimmy Savile’s activities at Leeds General Infirmary there is just one instance where he troubles hospital bosses. Doctors complain that, although only a volunteer porter, he is plonking his vast Rolls-Royce in the consultants’ car park, filling two bays.

Savile skulking the wards in the dead of night; his access to nurses’ quarters and mortuary alike; the near-universal disgust felt for him by female staff — and, of course, his copious crimes — were not under their purview.

For a study in absolute power — how to win and exercise it; how to create useful allies and deflect would-be enemies; how to indulge undetected your taste for violence, humiliation and sexual depravity; how to steal trophies from the dead and the innocence from children and yet be garlanded with honours — forget Machiavelli. Read the Leeds and Broadmoor hospital Savile reports. Not every despot needs a nation; some go freelance.

The first principle of Savile’s modus operandi was: sort out the top and the bottom, then the middle will neither care nor dare. So at Leeds he first befriends night porters, dropping in for late-night chats, buying TVs for their seedy hospital bolt holes where they drank, played cards and entertained women. All against the rules, but Savile wouldn’t tell if they kept his secrets, too.

Besides keeping sweet the lowliest men, Savile ingratiated himself with the most powerful. At Leeds he befriended the chief governor; in Broadmoor he actually chose him, after Edwina Currie bizarrely trusted his judgment in heading up a task force to change hospital culture. He promised the minister he’d win officers’ compliance by threatening to expose their overtime fiddling to The Sun. He never did; conscious, no doubt, of what they had on him.

In Broadmoor, he didn’t need the slapdash security guards to lend him keys, to slip him in without question as he had in Leeds. The governor gave him, along with an office and a house near the grounds, a whole set of his own. This not only afforded him a back route to the women’s wards, but guaranteed nurses never challenged what he was allowed to see. Some were uncomfortable as Savile watched the female patients bathe, commenting on their “nice Bristols”. But they knew he had the power to have them sacked.

“No one knew” is the Savile refrain. But they saw, they heard, they knew.

3 responses to “Savile and the abuse of absolute power”