“Today’s verdicts provide a long-denied justice to the victims of serious sexual offences. I would like to thank these victims for having had the courage to come forward and give evidence. The victims of sexual abuse, whenever it may have taken place, should know that police and prosecutors will listen.

“It is only right that we now take some time to consider our position on the hung count and we will update the court accordingly.” 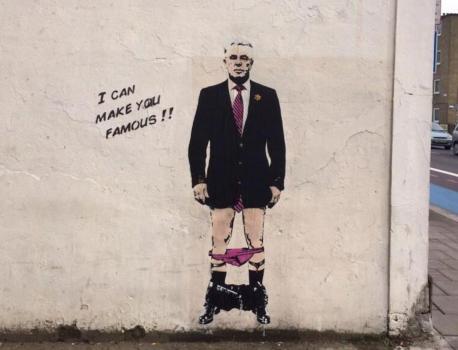 Guilty of abusing a 15 year old girl. Guilty of being a child abuser.

Spin that one Max!

PR guru Max Clifford has been found guilty of a string of indecent assaults on teenage girls over a period of nearly 20 years.

The 71-year-old became the first person to be convicted under the high profile Operation Yewtree sex crime investigation at Southwark Crown Court today.

He was found guilty of eight indecent assaults, cleared of two and the jury was unable to reach a verdict on one other.

He denied all the charges and continues to deny one outstanding offence, which the jury were unable to reach a decision on.

He was arrested by detectives from Operation Yewtree in December 2012, and charged in April the following year.

Stories over the last few days in The Mirror by respected investigative journalist Tom Pettifore, concerning allegations that a cabinet minister within Tony Blair’s first term abused young boys at Angell Road children’s home in Brixton, and that a police investigation which had identified him was dropped to protect this child sex offender, will rightly leave many members of the public concerned.

Several people should be questioned about what they knew about this. Both Alistair Campbell and Tony Blair are named in one of the articles, implying that they might have had some knowledge of what was going on.

Mr Driscoll’s investigation was scrapped soon after Ron Davies quit as Welsh ­Secretary when he was mugged by a male prostitute at a gay meeting spot on Clapham Common, South London, in October 1998.

A week later, Agriculture Minister Nick Brown was forced into revealing he was gay by the News of the World. Neither men are the minister suspected of child abuse.

Alastair ­Campbell’s entry for November 4, 1998, in his published diary, The Blair Years, states: “As TB said later, with a touch of black humour, we could get away with Ron as a one-off aberration, but if the public start to think the whole Cabinet is indulging in gay sex, we might have a bit of a political problem.”

But what about others close to the then Prime Minister ?

Peter Mandelson seems to have been in an ideal position to know what was going on and any insights he might have about abuse at this children’s home would surely be useful to the police. He was a councillor for Lambeth Borough  in the early 1980s around the time that the politician in question was first seen by a witness who had been a trainee at Angell Road at the time.

Not only that but in the 5 months from July 1998 until his resignation as Secretary of State for Trade and Industry in December 1998, he would have been in the same government as the alleged paedophile minister, at the time that Detective Chief Inspector Clive Driscoll was investigating these allegations.

As a close friend and confidante of the Prime Minister, isn’t it a reasonable assumption to make that Tony Blair would have consulted with Peter Mandelson, a master of news management, about these damaging allegations ?

Has anybody asked him ?

One of Tony Blair’s ministers was among a group of men suspected of sexually abusing children at a home run by a convicted paedophile.

But the probe was halted soon after an ex-social services boss told police of his alleged evening visits in the early 1980s.

Official documents seen by the Daily Mirror during a 16-month investigation reveal former residents told detectives that a group of paedophiles attacked children in a private flat in the home.

But two former Lambeth social services employees involved in the case suspect a cover-up because experienced detective Clive Driscoll was removed from the investigation and given other duties.

One, a former manager who alerted police in 1998, said: “One wonders why Scotland Yard would be so desperate to stop it being investigated.

“I believe it was stopped because somebody in power was trying to prevent any further investigation into the politician.”

Who are the Mystery Liberal MPs Des Wilson refers to?

Former Liberal Party President Des Wilson has written a scathing piece about Cyril Smith and the Liberal/Liberal Democrat Party for today’s Mail. Wilson writes in disparaging terms of a self-serving parliamentary party out of touch with its own activists, of feeble MPs too afraid to stand up a sexual and political bully like Smith, the ineffectiveness of David Steel as leader, and so on. The following passage is especially interesting:

Oh, I remember them all.

There was the MP who virtually sustained the whisky industry on his own. If you lit a match too close to his breath you could have made Guy Fawkes Night look like a back-garden barbecue. Many a bar would have been bankrupted without his presence. (And this was before the days of Charles Kennedy.)

As for affairs, Paddy Ashdown was not the only parliamentary party member whose secretary was valued for more than her…

PAEDOPHILES are to be treated in the same way as terrorists under a crackdown on child abuse to be unveiled in the Queen’s speech.

Sexual predators who download manuals on how to groom their victims will face the same sanctions as terrorists who download guides to bomb-making.

While it is an offence to possess indecent images of child abuse, a legal loophole means there are no sanctions for possessing manuals that provide advice to paedophiles on how to identify and win over victims and evade capture.

Other measures in the Queen’s speech on June 4 will include:
— A serious crime bill, modelled on America’s anti-mafia laws, that will enable prosecutors to jail for up to five years lawyers, accountants and other professionals who help crime lords
— A crackdown on zero hours contracts. The coalition will match Labour’s pledge to scrap exclusivity clauses, where firms bind some workers to zero hours deals and do not let them work elsewhere
— A bill to help small businesses secure faster payments from large firms
— And an infrastructure bill that will amend the trespass laws to allow fracking firms to run shale gas pipelines under private land, as revealed by The Sunday Times last month.

David Cameron decided to take action on paedophile manuals after GCHQ and the National Crime Agency (NCA) found online examples in the “dark web” during their investigations into child abuse.

The prime minister told The Sunday Times: “It’s completely unacceptable that there’s a loophole in the law which allows paedophiles to write and distribute these disgusting documents. I want to ensure we do everything we can to protect children — and that’s why I’m making them illegal.”

The new paedophile law will be in force by the time of the general election next year. It could take the form of an amendment to the Obscene Publications Act 1959 so paedophiles who possess training manuals would be prosecuted. The Terrorism Act 2000 outlaws terrorist training manuals.

Details of the crackdown come days after it emerged that a paedophile teacher drugged and molested up to 60 boys as young as 10 at a British private school after four decades spent abusing children at other schools around the world.

William Vahey, who taught history and geography at Southbank International School in London between 2009 and 2013, killed himself last month as FBI investigators began to uncover his crimes.

Paedophiles have for years shared guides on abuse but the internet has meant they are now more easily distributed among abusers.

He was jailed for eight months after admitting 10 counts of making indecent images of children.

The judge, Michael Pert QC, described the manual as “a step-by-step guide to having unlawful sex and recommends targeting single parents”.

One guide obtained by an American television channel outlined dialogue an adult could have with children to gain their trust. “Getting yourself an animal should be the very first thing to consider if you are serious about finding a child love candidate,” states the guide. “Animals are what we like to call child magnets.”

Last May Evan Harries, 44, who is originally from Wales but lives in Ireland, was found with a 99-page guide to paedophilia after his home in Wexford was raided. The manual was entitled How to Befriend and Form a Sexual Relationship with a Child.

Harries had 7,500 images of child abuse on his computers and was sentenced to four years in prison.

In February 2002, Julian Levine, then 54, a paedophile from London, was jailed after hoarding 42,000 pictures of abuse. A guide written by Levine described being a paedophile as a “hobby” and was entitled The Hobby Dos and Don’ts.

It suggested approaches that could be used to engage children, activities that would involve meeting children and tips on approaching children in the street.

Amazon faced outrage four years ago when it was discovered that a manual called The Paedophile’s Guide to Love and Pleasure: A Child Lover’s Code of Conduct was being sold on its site. It withdrew the book after a threatened boycott by customers.

But most of the material to be targeted by the new law is hidden in the dark web, which cannot be accessed through conventional internet searches.

The NCA estimates that 20,000 people in Britain will soon be using the dark web. In order to access the sites paedophiles first download special software — and when they access the sites, the technology gives them anonymity.

Britain and America set up a joint taskforce last year to tackle online threats to children. It brings together experts from the FBI and the NCA and senior government sources say GCHQ is also involved.

A former Google and Facebook executive, Joanna Shields, is leading a group of industry experts to produce technological solutions to the threat. She is hosting an event in London next month to tackle the dark net and combat live video streaming of child abuse.

The NCA will run a key test of search engine results next month to check that child abuse results continue to be blocked.