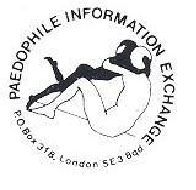 That’s the remarkable claim made to me by a former Home Office insider this week.

PIE was established in 1974 to campaign for the age of consent to be lowered to four years old.

Many former members have been imprisoned for child abuse crimes…

…The retired insider told me that he recalled raising his concern that the Volunteer Services Unit of the Home Office was directly funding the work of PIE.

His recollection was that he raised his fears with superiors but was left in no doubt that he should drop the matter.

I’ve written to the Home Secretary asking her to initiate an inquiry.

It’s not the first time Theresa has had to investigate her own department.

Tom Watson in The Mirror

10 responses to “Did Government Fund The Paedophile Information Exchange ?”