In lieu of an apology he has issued through a spokesperson this feeble explanation, “He was giving her a frank piece of advice in private. It wasn’t meant in any way to offend or insult her.” Even setting aside that this “Private advice” was given at a public wildlife event in Ongar, Essex, what makes Eric Pickles think he should offer medical advice ? He’s not a health care professional afterall.

This isn’t the first time that Eric Pickles has masqueraded as a ‘professional’. As you can read below, for a long time he led people to believe that he was a qualified lawyer… 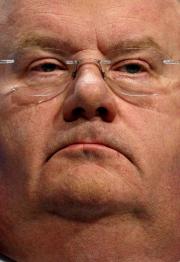 The Face of Boo!

Shortly after being quizzed by Schopen, Pickles filled in his register entry for the second time in 9 years. He now gave his occupation as “Self employed lawyer” working in “Industrial and Employment law”. He added “no work in Bradford” as if to emphasise there could be no clash of interests between his private and political life.

Indeed, Pickles had insisted to Schopen that he had always publicly stated he was an employment lawyer working mainly in the North West. Records bear this claim out.

When he first stood as a councillor in 1979, Pickles had described himself on his election manifesto as “A Lawyer” only weeks before he filled in the council register claiming to be an employee of the Tory party.

Other public statements over the 9 years he had served as a councillor showed him describing himself as “a lawyer”.

Many journalists had noted that Pickles was a “solicitor”. This is not surprising since the rather vague sounding term “lawyer” is in fact quite specific. A “lawyer” is “someone qualified to practice law” and means either a solicitor or a barrister. Since Pickles had never claimed to be a barrister, journalists naturally took it that Pickles’ reference to being a “lawyer” meant he was a qualified solicitor. It was well known that Pickles had studied to be a solicitor in the early 1970’s.

There was just one small problem with all this – Eric Pickles had failed to qualify as a solicitor. And anyone who describes themselves as such without the necessary qualifications commits a criminal offence!The Solicitors Act 1974, Section 21 reads;