“Even after the former Tesco worker had been arrested and charged he carried on offending, the court heard”

So, Judge John Dixon jailed Francis Knight for 16 months (likely out in 8 months) after he admitted 18 charges of inciting boys aged under 14 to engage in sexual activity, and making indecent images of children.

He’s going to serve less than 15 days for each charge. 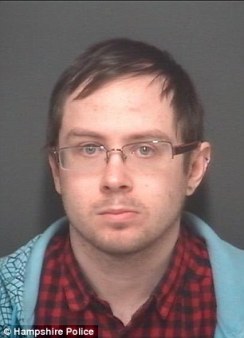 A paedophile stole teenage girls’ identities from Facebook and used them to persuade boys as young as nine to perform sex acts for him.

‘Manipulative’ Francis Knight, 31, who befriended his victims by posing as girls whose accounts he had either hacked or cloned, contacted as many as 250 children online, a court heard.

As Knight, from Portsmouth, was jailed for 16 months, it emerged one girl whose Facebook account he hacked was forced to change schools because of the stigma of the case.

The cases of six victims, aged from nine to 13, were outlined at Portsmouth Crown Court.

But Knight, described as ‘calculated and artful’ by a judge, admitted he had contacted around 250 youngsters over a period of two years.

Even after the former Tesco worker had been arrested and charged he carried on offending, the court heard.