Firstly, an up front apology to the German blog brunoleaks for posting so much of his content directly on here. There is plenty more content about Spartacus, so please check it out.

Secondly, apologies for the google translation. It’s not quite as difficult to decipher as certain held up documents you may have seen recently but it can be a little challenging but worthwhile. 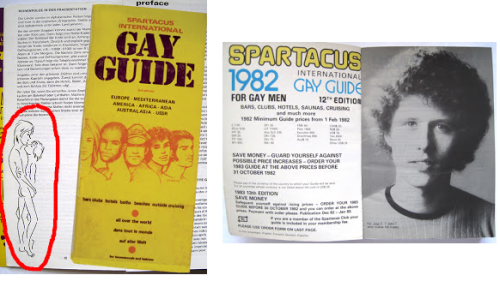 The story of the SPARTACUS guide begins
1970-  John D. Stamford in March brought in Sussex [near the pretty gay Brighton] published the first ‘Spartacus’. At 109 pages total of 3,000 gay meeting places (were Homophilic meeting places ) listed. Of these, 60 in London and more than 200 locations in the United Kingdom.Stamford had set itself the goal of shaping a “better world for gays,” to fight against the hidden loneliness, to facilitate contacts and helping to build an international network of cooperating organizations. (Up to here ‘Wikipedia’) in the first edition was in Stamford, to being involved in the law reform of the 60s in the UK … Anyway, he seemed to come from districts that have made ​​the pursuit of justice for his own homosexual interests and those of the other set. ( Peter Thommen / Arcados, 11/2006 )

1973- was published in December of ‘Spartacus’, 3rd Edition, for the first time in Amsterdam, “the liberal climate of the Netherlands”. During that time a lot printed in gay publications DORUS had illustrated the title page, in the inner part are the countless boys illustrations on.
Until this issue is published, the name Stamford not in the guide, but Euro Spartacus, Post Office Box 3496, NL 1001 AG Amsterdam

1981- was already the ‘Spartacus’ in severe turbulence. In ‘Gay Journal’ 8/1986, 20, says: “He was responsible for the exploitation of children in Thailand, Sri Lanka and the Philippines …”

(Full story coming later for language) in 1982- appears on 29 April in London’s not-gay EVENT Magazine (city magazine London) following guide discussion, here reproduced in full, because it draws an interesting and comprehensive picture of John D. Stamford and its shops: Good Man Guide. David Roper on the ‘Spartacus Gay Guide . ‘ He started his adult life as a Catholic priest in Brighton. Now he’s head of what must be the largest gay business empire in the worl d He is the only one who knows the exact circulation figures for the world’s most comprehensive homosexual information guide, Which this year alone may sell as many a quarter of a million copies at £ 7.50 (which corresponded to the time 32, – DM) for 750 densely printed pages. Such is its reputation that it is now sold by ‘Foyles and Collets’, though thousands more copies are consulted and furtively Memorised in bars and clubs from Bangor to Bangkok. What began as a gay guide listing in Brighton is now in position Whose power Enables the owner to offer advertising space by invitation only to those establishments of ‘quality’ that have been awarded at least three stars in the guide.And there are enough advertisers who are willing to pay £ 600 (which corresponded to the time 2550, – DM) for a full page without knowing the print run -. safe with the assurance that each year’s guide sells out entirely by September There can not be many people who can afford to replace their ‘Spartacus’ annually, though the listings Thurs change constantly thanks to reports sent in by readers and constant Egon Ronay style updating by their own assessors. And with a seven workstation computer digesting those facts and well-established international contacts, it’s unlikely that anyone will be able to supersede their information easily. And in any case, John D. Stamford is not a man who would tolerate any meddling with the heavily protected set-up he runs from a box number in Amsterdam (in the early, less permissive days they anticipated police problems if they Remained Britain ).Since the first ‘Spartacus’ appeared in 1970, the company has grown to include diversified and a holiday club offering discount at various establishments, reports on specific areas examined as the Far East or California, and a contact service of around 200 couriers to help members find their way round foreign parts. Every two months they publish a rather tawdry travel guide that consist of John Stamford’s diaries and visits about the globe: happier doing field research than supervising his empire, Stamford spends most of the year on the road in at impressive mobile home (numberplate Boy1) – well in keeping his flamboyant lifestyle of meeting with government officials and club owners.

In his editorial in the latest ‘Spartacus’ guide for Stamford hits out at those governments that try to be ‘Virtue-vendors’ – preferring local exploitation to cash-flush tourists from the West – and begins to refer to them as Nazi repression . What he objects to is the practice of those third world countries that have chosen to discourage the gay (and often pederast) tourist lavishes boys with money in exchange for sexual favours  is this any more reprehensible than making the boys work in shops and small factories for little or no wages … and then screwing them away?
‘Spartacus’ appears to be in two minds over this one, and Peter Glencross, the company’s business manager is ready to admit that their promotion of parts of the third world what mistake Which is now being rectified. Stamford himself is against loud, flashy faggots , and Sri Lanka has been dropped from the listings at the demand of the country’s government; any places that the guide might have included local police would have Suffered trouble. Until two or three years ago, Sri Lanka was being offered as the paedophiles paradise – to honour that has now developed on the Philippines.
. A number of countries that have previously been omitted due to a lack of accurate information are included this year Burma has come. In (‘the Burmese is a true friend’) and Swaziland (no laws, no one in prison) is on the way China and Russia are always a problem since so few people of ‘persuasion that’ bother to holiday there, but even more surprising are the listings for Albania, Rwanda, St Bartholomew and Micronesia (eight out of ten guys available in exchange for a case of beer)!.
unanimously voted Europe’s gay Mecca once again, West Berlin is awarded plenty of four star entries, though it’s only London that gets a of five star accolades (Heaven, Subway, Napoleon, Bolts, the Tent), John D. Stamford , sole proprietor, has final word on all these tributes, but for UK listings at least, the guide depends on report and recommendations offered by Gay Switchboard.
Perhaps the most unusual entries in each section are headed ‘Facilities’, Which may be dropped for the next issue. The reason? ‘Spartacus’ thinks most correspondents find these details unimportant, though, for all they know, there could be a silent ‘Majority’ which finds them indispensable, needless to say, inspectors Tellows check the local shit houses, and apart from the legal complications of inciting lawlessness, it is the one area of the information spectrum that threatens to lower the whole tone of Stamford’s Good Man Guide.He comes across as strangely moral for someone who can claim to have produced male porn mags before anyone else, and the former guest -house owner’s most recent targets are the users of poppers (amyl nitrate), anyone who smokes in bars, un-air-conditioned clubs and uncircumcised men (they should wash several times a day). If any premises falling below his standards ‘Spartacus’ takes up the complaint with the owner, Whose unwillingness to make improvements leads to a quick snip in the next edition. At the same time as he offers grants for research into VD and other health hazards, Stamford now publishes and distributes the ‘Pan’ Which magazine ‘deals honestly with boy-love’ by printing interviews with international youth to ‘recent research by psychologists on the untraumatised realities of man / boy relations’. For the first time, they have just launched ‘Panthology I’, a collection of stories about rather tame nephews visiting during their public-school hols or willing slaves in ancient Rome. What we do not know is just how much money this 43 year old Geminian from Lancashire has made ​​from his enterprises, none of Which have that cleanly acceptable air of self-help that characterises the ‘San Francisco Pink Pages’ (a Yellow Pages for anyone looking for gay plumbers, poodle-trimmers or typists), Which may be soon to be seen in England. Those who have met John Stamford Tellows find him easy to get on with , and his liability to bear a grudge for decades has led some unkind foes to spread rumour that his next project is likely to be a walk on water. The was that his arrival in a foreign country amounts to: ‘I am John Stamford, send me up a guy in exchange for a T-shirt on and English cigarette’ does not prevent anyone from Recognising that this year’s guide is far more accurate than any previously published. The rest of his literary output has a distastefully pornographic flavour , Typically disguised as ‘scientific’ or serious articles. Mr. Super Morality has this to say in his defence: “One is justified in suspecting some sort of international conspiracy against us by many of those black men who execute the laws of the world. And in this dark crusade a new breed of virtue-vendors are appearing in the press with more regularity – men and women who are making themselves rich and powerful nicely out of ‘cleaning up’ (that is, de-sexualising) the world. It is not difficult to draw a parallel between the Britain of 1981, for example, and Germany on the eve of the Nazi take-over. What can we do about it? First, we should not let the Nazi types and virtue-vendors hang a guilt trip on us. We must confront them and expose their distortions and reveal their real purposes in mounting these attacks: to wipe out homosexuals and homosexuality and to grave publicity and all the power and the money that goes with it ‘.

Now, really, what does he mean? 1983- SPARTACUS first informed about AIDS. Previously there was only a small chapter about STDs.

1983- injunction against Spartacus 1983 issue: “Without ‘treatment’ may be sold … no copy exists … in the defacing of a criticism which Stamford wrote in ‘Munich’ against two local nightclubs These companies so railed Stamford. Homosexuals were regarded with disdain, but take as much money as possible from them, but nothing of them invest in the homosexual scene – neither of the two plants had inserted in Stamford ‘Spartacus’ … observers regard to these ‘legal warning shot’ as John Stamford ‘long overdue’:. The Spartacus publishers distribute according to your preference and experience autocratic Plus ujnd cons on gay establishments ‘around the world’, at least in those places where he appears in person (and he travels a lot), should He means it, making its assessment strongly depends on the circumstances, as it is received and considered at the ad orders . “