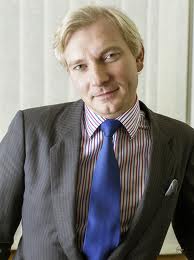 SENIOR Tory politicians including Michael Heseltine, President of the Board of Trade, and Lord Archer have invested more than pounds 100,000 in a loss-making shirt shop owned by the disgraced former Tory MP, Harvey Proctor, perusal of the register of members’ interests reveals to the curious inquirer.

The register discloses the fascinating fact that no fewer than 11 current MPs have shareholdings in a little-known clothes retailer, Cottonrose Ltd.

This turns out to be the company behind a quaint shirt shop nestling in a Georgian alley in Richmond upon Thames, one of London’s most elegant suburbs.

Its name is Proctor’s, and inside, among the bright cotton shirts, silk ties and gaudy waistcoats, is one of the more colourful figures of the Tory party’s recent past, Harvey Proctor, who was forced to resign as MP for Billericay in 1987 after being fined pounds 1,450 for acts of gross indecency; he was involved in homosexual spanking sessions with young male prostitutes.

Mr Proctor turned from politics to hosiery and opened his shop in Brewers Lane, off Richmond Green, in 1988 with a pounds 2,000 grant from the Government’s Enterprise Allowance Scheme, and a little help from his friends: a start-up fund of pounds 75,000 was organised by Tristan Garel-Jones MP, the former Tory deputy chief whip and one of the party’s best-known fixers.

Several MPs who, like Mr Proctor, have suffered public reverses to their political careers also coughed up at least pounds 5,000 each. They included Neil Hamilton, forced to resign as Northern Ireland minister last week after allegations that he was rewarded by Mohamed Al Fayed, owner of Harrods, for helping in his battle with Tiny Rowland; Tim Yeo, the former Environment minister who was forced to resign after news broke of his adultery with Julia Stent, a Hackney Labour councillor, who bore his child; Michael Brown, who resigned as a Tory whip last May after a tabloid newspaper reported his homosexual affairs with a youth and a Ministry of Defence civil servant; and David Ashby, who suffered unwelcome publicity after admitting sleeping with a man but denying having sexual relations with him.

Then there were former MPs who, like Mr Proctor, have lost their seats: they include Sir Neil Thorne, William Benyon and Sir Charles Morrisson. All invested in Cottonrose. All have not done well. For business has not gone smoothly with the company: in the four years to March 1992 it made losses totalling pounds 109,421. Last year Mr Proctor failed to submit accounts for 1993, in breach of the Companies Act.

Asked about it yesterday, amid the gold cufflinks and Tino Cosma accessories, the silks and the satins, Mr Proctor’s response was more of the sackcloth variety. ‘I don’t talk to lying newspapers,’ he said. ‘That is my quote. If you don’t leave my shop I shall call the police.’

Mr Proctor, who invested pounds 20,000 of his own money, opened in a fanfare of publicity. He opened a second shop in Knightsbridge and, for a while, appeared to have a success on his hands. He was elected to the local chamber of commerce. John Major ditched his Marks & Spencer shirts in favour of Mr Proctor’s more elegant wares.

In 1991 the investors ploughed in another pounds 10,000. MP Neil Hamilton’s wife, Christine, bought pounds 500-worth of shares. The extra cash injections were to no avail. Losses in 1990, the second trading year, totalled pounds 26,547; in 1991 they climbed to pounds 46,066; and accounts for 1992 showed a loss of pounds 31,497. The position since is not known: Mr Proctor has yet to file accounts for 1993. Under Section 240 of the Companies Act he is obliged to file them within 10 months of the end of the financial year. They should have been lodged at Companies House by last January.

Last night MPs had resigned themselves to losing their investment. Sir Nicholas Bonsor said he feared he would not see his pounds 5,000 again. ‘It was suggested we ought to rally round because he was clearly in great difficulty. We did make an effort at one stage; I had a meeting with other MPs and Harvey Proctor and, I think it was, his brother who was working in it with him. But then it looked as if it wasn’t going to work so I think from that stage we wrote the investment off.’

Mr Heathcote-Amory said: ‘Well, if I got the money back I’d be pleased – I’d rather written it off actually. It (the investment) was a gesture to help him (Mr Proctor). I felt a bit sorry for him. I haven’t seen any accounts for a bit. That is not a complaint, but I’d rather lost interest in the thing. I think I’m braced to lose my equity.’

At least five of the Tory investors are MPs who have also suffered heavy losses on Lloyd’s insurance syndicates.

Mr Heseltine’s personal assistant declined to comment on the losses and Mr Proctor’s failure to lodge accounts, saying only: ‘The President of the Board of Trade would expect this company to be dealt with in the same way as any other. Mr Heseltine is not available at the moment.’